Research in our archives

In April 1994, the Southwestern Union Conference and the Board of Trustees for Southwestern Adventist University dedicated the newly-constructed Chan Shun Centennial Library, a soaring, four-story building, crowned by a clock tower and observation room. From the library's dome patrons have an unsurpassed view of Johnson County's environs, with 50 mile visibility on clear days.

This building commemorates the first classes held in 1894, representing alumni and community members who pledged funds and resources to build and furnish the space. Chan Shun replaces Findley Memorial Library (1961-1994), Penuel Hall (1921-1961), and the University's first administration building (1895-1921) as the library's home.

Just outside the library, at the north entrance to the building, a bronze statue of a professor greets all who enter. This figure holds an open Bible in his hand, with the words from Proverbs 9:10 inscribed on the base, "For the reverence and fear of God are basic to all wisdom. Knowing God results in every other kind of understanding." Johnson County leaders gave the statue, "Where Wisdom Begins," by Rick Jackson, to the University in recognition of Southwestern's contributions to the community and in support of Southwestern's commitment to provide a Christian environment for higher education. Also inscribed on the base are the words, "The professor teaching from the Word of God embodies our belief that true education seeks excellence in body, mind, and spirit."

Southwestern Adventist University named the library for Dr. Chan Shun, a major donor to the library's building fund. Dr. Chan Shun, though not a Southwestern alumnus, shares Southwestern's ideals in that he credits his Maker with providing the wisdom and acuity he needed to excel in business. In response he dedicated his life and a significant part of his wealth to serving God. This Seventh-day Adventist clothing manufacturer from Hong Kong created the highly successful Crocodile Garments Limited, which at one time was the world's largest shirt manufacturing company. The Chan family established four charitable foundations to fund the construction of churches, hospitals, and educational institutions, including Southwestern's library.

Southwestern Adventist University is honored to have Dr. Chan Shun recognized for his devotion to God, to education, and to the well-being of Christian young people, through the library. Hundreds of other donors, each with stories of hope and commitment, have contributed as well, and have created a legacy of mission that permeates the library's environment.

A small collection of original and reproduction artwork is housed in the library. The themes vary from depictions of Christian beliefs, the early Adventist experience in Texas, the environment and people of Texas and the southwest, to sculptures of cultural figures. As well, a selection of masterwork reproductions is on display in Meadows Gallery, where special exhibits are occasionally installed in collaboration with academic departments. 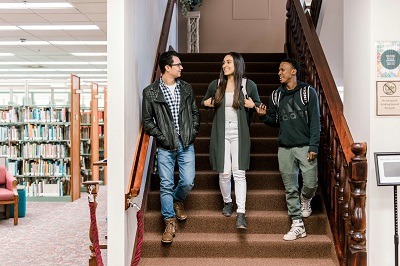